On this Thanksgiving Day, I’ve been thinking a lot about my family and My Little Pony. The former is obvious, and the latter is mostly apropos of nothing other than I happened to read an article from Polygon this morning on the subject. However, they intersect in a way that is deeply personal to me and my transfeminine experience. 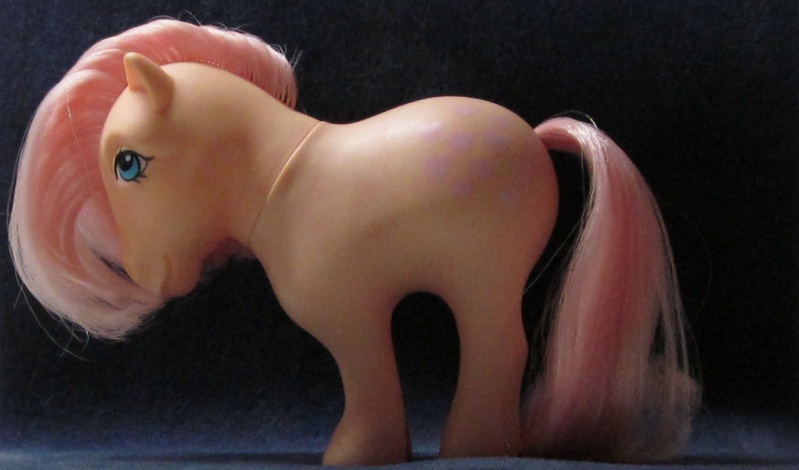 My gen 1 Peachy figure. Peachy is one of the earliest My Little Pony toys that I remember.

I still remember very clearly my first encounter with My Little Pony. Since I was raised as a boy, I didn’t really have much concept of them other than that they existed (because commercials). I never experienced the girls toy aisles firsthand at Toys R Us until my sister was past infancy (we’re six years apart). My parents chose what I watched on TV, and that ended up being things like G.I. Joe and Transformers (which I definitely don’t hate, another topic for femininity and toys for another time). My first real experience with the little colorful ponies was with my cousin. When I was really young, my mother would visit her sister a lot, and my cousin (a girl) and I would be left to play on our own. She naturally had toys like a bunch of plastic cookware and food, dolls, and … candy-colored My Little Pony toys.

I loved them. I loved the bright colors, the uniqueness of their cutie marks, the amazing and beautiful names like Peachy, Medley, Moondancer, Minty, and so many more. I loved how my cousin and I could make up random stories about them, inspired by the simultaneously strongly identified yet blank slate horses. I really, really wanted some of my own to play with at home. But I knew I couldn’t. Even at five years old, I’d had enough run-ins with “that’s for girls” that I knew better than to ask. I remember in particular one time when my grandmother bought me a Cabbage Patch Kid doll that I really wanted, only for the rest of my family to give disapproving stares. I think that doll disappeared almost as soon as it got home.

It’s amazing to me so many decades later that a child so young can already internalize the gender-based conditioning that society imposes and realize that trying to break out of that mold invites humiliation and shame at best, physical retribution at worst. My Little Pony would become one of many forbidden fruits as I grew up. 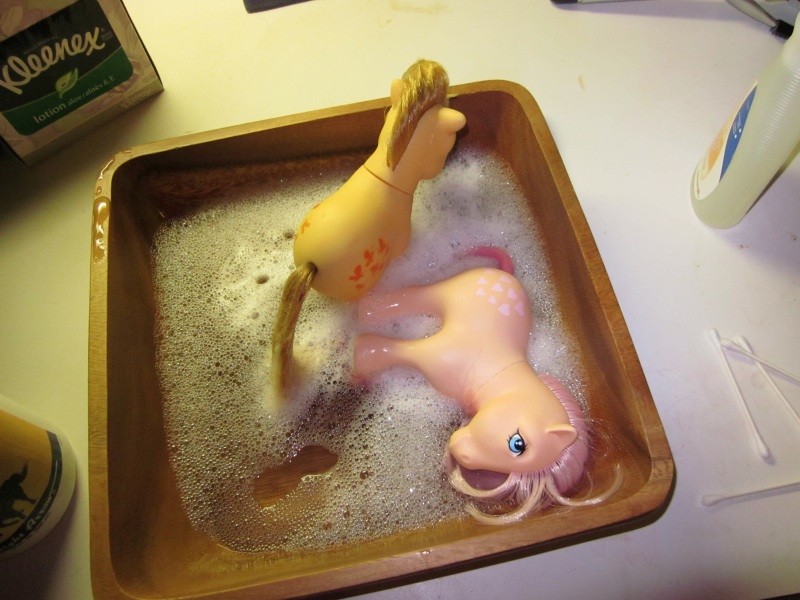 Cleaning and restoring old pony toys can be a relaxing, almost meditative, act.

Fast forward nearly 30 years to 2010. My Little Pony suddenly re-entered the zeitgeist in a big way thanks to the new Friendship is Magic television show. I only found out about this because my social media feeds were suddenly awash with pony memes. If I recall correctly, iTunes at the time was letting people stream the first episode for free, so I decided to take a peek and see what all the commotion was about.

And there it was. The magic was there again, just as I remembered it. I hadn’t really thought much about My Little Pony since that early encounter, but I immediately fell in love all over again. It probably doesn’t hurt that Lauren Faust, the show’s creator, also grew up with the early toys and poured a lot of that same love into the new cartoon. It only took that first episode to hook me, and suddenly I found a way to recapture that moment of imagination, of creativity, and of femininity that had been denied to me. That was all the encouragement I needed to start buying my own pony toys, both old and new, free of judgment.

Of course, describing My Little Pony, especially as it exists today, as “feminine” is doing it a great disservice. That was how I framed it in my mind, but that’s just regurgitating societal conformation. The truth, as so many new fans of the toys and show have discovered, is there’s no such thing as “for boys” or “for girls.” My Little Pony and so many other pieces of media and play are for everyone. I’m glad that more children today are being allowed to experience all types of media, a freedom in selection that many of my generation and earlier did not get. It’s not perfect, and I still see a lot of parents gatekeeping what their children interact with based on gender, but I feel like overall it’s getting better.

My hope is that some day, every child can play with whatever toy they want and not be made to feel ashamed by clueless adults like I did. 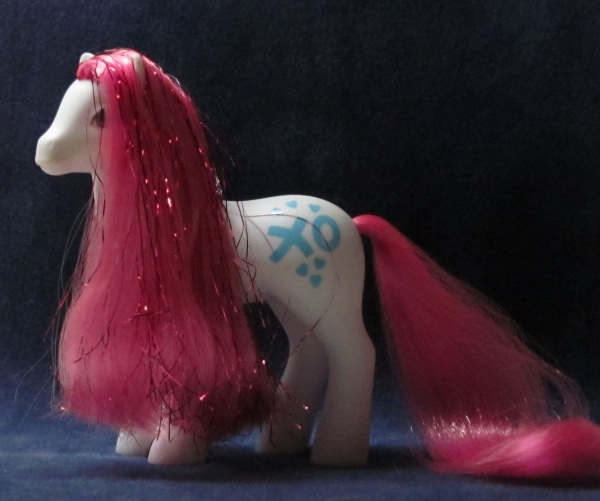 Lovin' Kisses, one of my personal favorite ponies. I love her sparkly hair.