I’m back! The last couple of weeks felt like they lasted forver, mostly because it’s been an extension of living out of hotels for the last month or so. I’m finally settling down in a new apartment in Austin, though there’s still a lot of boxes everywhere. If you’re curious, here’s a quick recap of the last two weeks for me.

My wife and I really like Disney, so admittedly we spent our honeymoon here (in 2014) and decided to come back for our second anniversary. If you hear me talk about vacations, you’ll quickly learn that for us, it all revolves around the dining. I wouldn’t say were “foodies,” but we do love to try new places and the Disney dining plans are great for that. Last time we didn’t get our reservations in until three months before our trip, so we missed out on a lot of the restaurants we wanted to try.

Here’s a few highlights from the trip:

The Food and Wine Festival is always a lot of fun (and why we like going this time of year). Lots of food (and wine!) to try, and you can spend the dining plan’s snack tokens on the different booths, which is economical.

Le Cellier is still our favorite, I think. This is an amazing steakhouse in the World Showcase’s Canada section. We got to try bone marrow for the first time. It was really buttery, tasted like pure fat but not chewy at all.

Restaurant Marrakesh in the Morocco section is a new one for us that we both really loved. It had been a while since I had some really good Mediterranean cuisine. The salmon plate I had was simply amazing.

Another one we really enjoyed was Chefs de France. I don’t think I’ve ever been to a French restaurant before, so it was both new and yet familiar (a lot of our Western cuisine is influenced by the French). I got to try snails! They were good. Also, this experience was much more pleasant than our previous attempt to try the fancier Monsieur Paul. That place was way out of my league, and we ended up skipping it back in 2014 (a fun story to ask me about over a beer).

Lastly I can recommend Morimoto Asia. We were pleasantly surprised with how they’ve built up Disney Springs, and there’s a lot of new restaurants that weren’t even on the web site back when we made reservations in April. Luckily we were able to get in this place for lunch and try it, and we had some great dim sum, ramen, and sushi.

One thing you’ll notice is these are all from Epcot (and one from Disney Springs). Sadly, dining at the other parks just isn’t that great from what we’ve found, and this’ll probably be the last time we try it. As for non-dining fun, here’s a few things we really liked:

The Kilimanjaro Safari in Animal Kingdom is the best part of that park, and is a decent use of 30 minutes of your time. I took a lot of pictures and video that I still need to upload. Sadly, unless you have very small children, the rest of Animal Kingdom is kind of a waste.

Fantasmic! in Hollywood Studios is a great way to close out the night with fireworks and singing and all that fun stuff. Highly recommended for just about anyone, unless you hate Disney… but then, why would you be at Disney World?

An unexpected bonus was the tour Behind the Seeds in Epcot. We did this on a whim after it was suggested by the Living off the Land ride, and I’m really glad we did. You get a nice, intimate walking tour with a small group through all the research areas and hydroponic gardens. I can’t recommend this one enough if you’re at all curious about such things, though if you have younger children with you they will likely get bored.

(Quick disclaimer: I’m a Blizzard employee, if you didn’t catch on to that yet. These are just my personal opinions below and nothing official.)

So this would be my third BlizzCon this year (I went to 2013, 2014, skipped 2015). However I got to see it from a completely different perspective this time. Since the BlizzCon web site will be part of my portfolio next year, my team and I sat down with the current owners to see how it’s done. This meant I mostly spent the convention in a back room talking to engineers and watching out for bugs with live streams and mobile applications. At least it was educational!

I did get a chance to get out and about a little bit this year. I really loved the Overwatch stage! 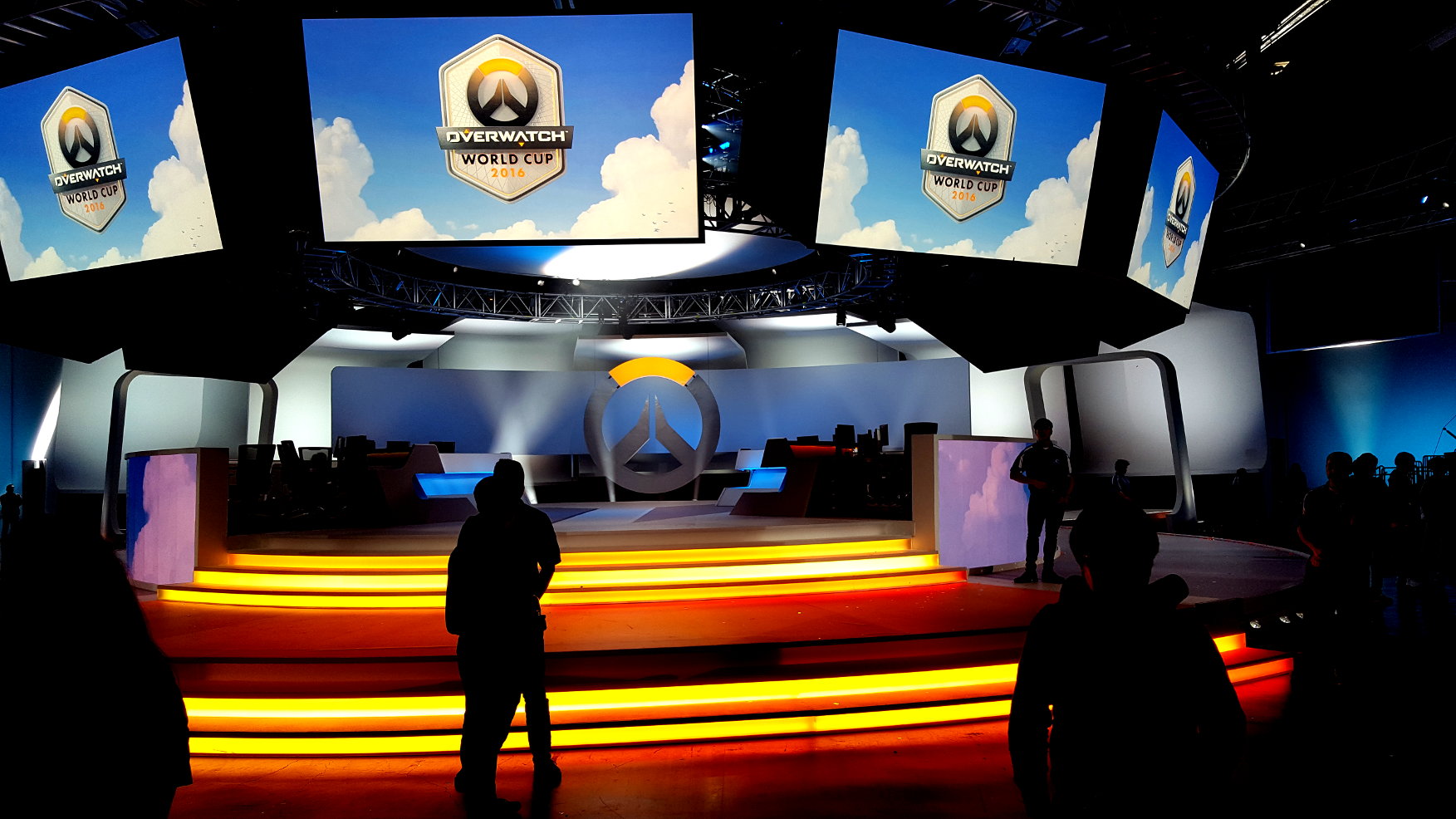 Also, I was graciously invited by Team 5 to sit with them and sign posters in the Hearthstone signing area this year. Part of my current portfolio is the Hearthstone web site, but also back in 2015 I worked with them extensively on upgrading their APIs for Battle.net to work better in the Unity3D platform. They’re a really great bunch of people to work with. Signing was way more fun that I even expected. Naturally I’m an introvert, but it was a great opportunity to say hi and talk with a bunch of the fans. Although, people kept bringing me some really nice stuff for me to sign (like a custom-made leather quiver); I was so worried I was gonna mess up something while trying to sign it. o_o

Esports is such a huge deal these days, too. It was really great to walk between the various competition stages and see all the fans cheering for their favorites. I swear the Heroes of the Storm audience sounded like they were at an NFL game. I’m really excited to see where the whole of esports goes in the next few years. Overwatch League looks like it’s going to be lots of fun.

There were so many cool things in the store this year too. I saw some folks wearing the new Tracer bomber jacket, but by the time I looked for it, it was sold out! I really hope we get some more of those in stock. I desparately need one.

The cosplay was especially great this year. There was a really epic Reinhardt walking around. I wish I could’ve gotten a picture, but I didn’t have my phone with me when I saw him. The Garrosh cosplay that one the costume contest was simply stunning. Even up close, it looked perfect. Major props to that guy.

I did get a picture of these guys. <3 Blizzard furries. 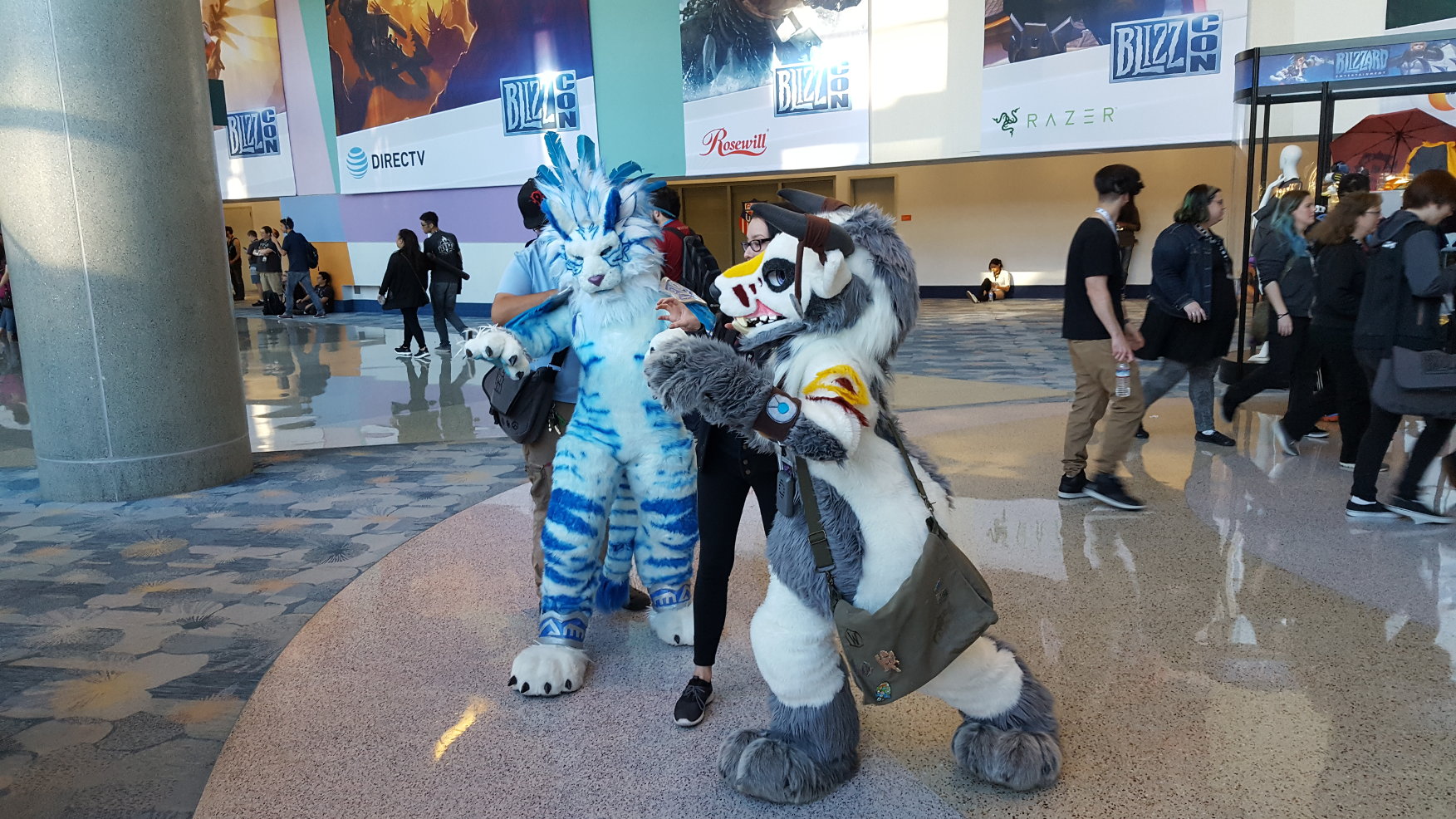